I used to love watching Joe 90 as a child. It wasn't my favourite Gerry Anderson series but, even if I don't remember any details apart from the basic concepts and a rather groovy flying car, I also don't remember disliking it.

I've had it on DVD couple of years now and I've watched two episodes. I find I don't like it. OK, it's aimed at children and I'm nearly 49 but that isn't the reason.

I find it disturbing. The whole premise of the show is that Joe becomes a secret agent when his dad invents a machine that can record people's thoughts and play them back into his son's brain. Joe is nine years old.

Can you imagine the psychological damage that would cause to a developing mind?

Not only does he acquire all sorts of espionage skills, including the ability to kill, but also, I can only assume, all the other adult baggage that floats around in grown-up minds.

I don't think many adults could cope with that. How could a nine-year-old?

And what sort of man does that to his son?

Charity shop? I have some DVDs for you.

I've had a box of Fridge Magnet Poetry for years but it has just sat on top of the fridge gathering dust.

Recently, I started puling out words at random and building poems over line at a time.

Apart from the "est" this came out the box in the order you see here. 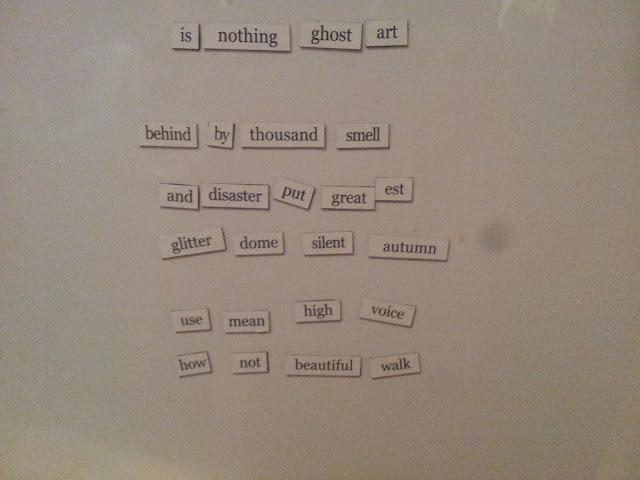 Points of note for tourists in Covent Garden

Before I embark on this, I should point out that I am not a professional reviewer. My "reviews" are little better than the typical "I liked this because it was good" comment that a child might make but here, for anyone who wants to read them are my comments on G&S Opera Company's production of The Grand Duke at the 2012 International Gilbert and Sullivan Festival in Buxton.

The Grand Duke is the last of the Savoy Operas that Gilbert and Sullivan wrote and is also the least performed. I don't know the reasons for this but productions, especially professional productions, are exceedingly rare. The Grand Duke shares this distinction with Utopia Limited and only Thespis is performed less and that is because its musical score has been lost.

I am a comparative newbie to Gilbert and Sullivan so it's refreshing to be as much in the dark about a show as the rest of the audience. Most G&S fans have seen all of the operas several times. All except The Grand Duke. For many, this is a brand new G&S opera and they will have found the story puzzling. I know that one couple of G&S fans staying at our hotel were up until midnight trying to make sense of the plot.

What can I tell you about the show and this production?

The rough story concerns a theatre company who are plotting to overthrow the Grand Duke, although why is not clear. Their "secret handshake" is to eat a sausage roll while talking with a potential conspirator and if they eat one as well then they are also part of the conspiracy. This backfires when one of the company accidentally reveals the plot to the sausage roll loving Grand Duke's private detective. To mitigate this disaster, the accidental whistle-blower fights a "statutory duel" with a co-conspirator. This isn't a real duel but a draw of a card - the possessor of the higher card is deemed to have lost and is therefore legally dead. The purpose of the duel is so that the loser can be blamed for the conspiracy.

For me, as one who has dabbled in writing, the plot was complex enough to be satisfying but not overly so. The ending did not suffer from the normal weaknesses of G&S plots. No-one turned out to be the wrong baby nor did anyone cave in through the invocation of Queen Victoria's name or anyone have to marry anyone they didn't want to. The ending worked for me and hasn't yet had me thinking "oh hang on...".

The full plot, with spoilers, can be found on Wikipedia.

Aside from the lack of really memorable songs, I really rather enjoyed it. The only confusion for me was as a result of the casting two similar-looking actors for the Grand Duke and the Prince of Monte Carlo at a point where the duke was supposed to be legally dead (the result of another "duel") which made me think that the prince was really the duke in disguise. It soon turned out this wasn't the case.

I really can't see why this show isn't as popular as the others and I would definitely like to see The Grand Duke performed more often.

I'm not sure how surprised I am to learn that I am not that desperate to see the new Spiderman movie.

I think this stems from the fact that this is a reboot, a remake of an existing film to tell the same story again with different actors and in a slightly different way.

I know this happens and I know it can be necessary. We've all seen films and TV shows where the end product falls slightly short of the mark. I would love to see a remake of Xanadu, for instance, where the plot is as good as the soundtrack.

Battlestar Galactica is an example of where the slightly camp cheesy 1970s original was very successfully re-imagined as a dark, serious and eminently watchable series.

Where Spiderman differs from BSG is that the original was an already successful and relatively recent film franchise. It was popular with both comic and mainstream fans even though the story differed from the original here and there.

To my mind, there was no need to remake it and I feel exploited, in a way, to be offered a new version quite so soon.

I have a Brompton folding bike. I've mentioned it before. I ride to the station fold it up, go on the train with it then ride it at the other end. Hundreds of people do it daily coming into Charing Cross.

When I first bought it, I would carefully fold it up outside Charing Cross station, carry it through the barriers and then carry it all the way up the platform and then on the train. This made my arm hurt.

Then I realised that other cyclists wheeled their machines up the platform and folded them up before getting on the train. So I gave it a try.

Not only was it a lot easier on my arm but the people manning the ticket barrier would say a cheery good morning and give me and the other cyclists a smile. It made the day a little nicer.

None of us rode our bikes on the platform. We didn't get in the way of any other passengers. We caused no problems.

Tonight was different. Tonight I was greeted by a very officious pair of guards who insisted I fold my bike before I could go through the gate. I asked why but they ignored me.

I don't think I would have minded so much if they asked me to fold it politely and give some sort of reason. The words were polite, barely, but the tone was not. They talked to me in a very condescending tone like I was a village idiot trying to lead an explosive cow through the gate.

I did not feel like I was being treated like a human being. An explanation or even an "I'm sorry sir but we no longer allow unfolded bikes on the platform" would have helped but "you've got to fold that" with no reason just isn't good enough.

We will see what happens Monday.

I'm sure I make and break the same resolutions every year. For the record, however, here are my resolutions for 2012:

To lose weight (again). I lost nearly two stone in the last year but put a large part of that back on recently. This will stop.
To spend less. This comes at the end of a week that saw me spend over £600 on replacing tyres on my car and £1600 on my annual season ticket. Both costs were unavoidable but not a promising start. I will definitely spend less in the coming weeks!
To finish my novel. I could do a few hundred words a day or more if I tried.

I feel very committed but we all do,don't we?